Why Stock Markets, Initially Shaken, Went Up After Trump’s Victory

After a sharp sell-off overnight in Asia, markets staged a recovery on Wednesday as investors shook off the shock of a Donald J. Trump presidency and began to focus on whether his mix of policies could spur a still-fragile global economic recovery.

Futures for the Standard Poor’s 500-stock index initially plunged 5 percent but recouped nearly all their losses when stocks started trading in the United States. The major market indicators ended the day up more than 1 percent.

By their nature, markets are wired to look beyond the moment and into the future. In that regard, the bounce-back in stocks reflects the bet being made by many investors that Mr. Trump’s promises to increase government spending, cut taxes and ease financial regulations will outweigh his anti-trade rhetoric.

To that end, stocks that would benefit from more robust economic growth, like banks and companies tied to infrastructure and transportation, were in demand on Wednesday. Shares of Bank of America closed up 5.7 percent. The equipment rental company United Rentals ended up 17 percent.

More broadly, however, market experts said that Mr. Trump’s victory should be viewed as a loud signal from Main Street that the time had come for fiscal policy in the form of increased government spending to replace central bank activism as a means to stimulate economic growth.

“This was a political uprising,” said Jurrien Timmer, a market strategist at the mutual fund giant Fidelity Investments in Boston. “Monetary policy has been part of the problem, in that the wealth effect has not accrued equally. If the baton is passed toward fiscal policy, that would mean higher inflation and lead to a rotation toward cyclical stocks such as financials.”

For quite some time now, economists have been warning that the reliance of governments in the United States and elsewhere on central banks to energize economies via zero interest-rate policies and buying back securities was creating an uneven recovery by bolstering the housing markets in New York, London and San Francisco while real economies lagged.

How the Markets Reacted to Trump’s Stunning Upset

As Donald J. Trump began to solidify his path to the presidency on Tuesday night, international markets fell sharply. Wall Street was expected to react similarly, but was up on Wednesday. 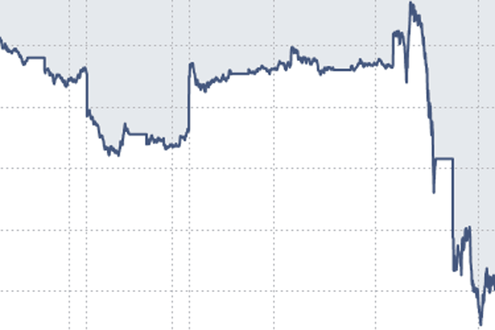 “The economic recovery under President Obama never reached deep enough — it did not bring working-class people up,” said Justin Gest, a public policy expert who has just written a book analyzing how working-class men and women in the United States and Britain have become alienated. “And the nature of the economy that Wall Street and corporate America has promoted reflects the gaping inequality in this country.”

Increased government spending on highways, bridges and roads may well provide a lift to the broader economy, and tax cuts and looser regulations will be cheered by the financial markets.

But there are downsides to these approaches, including increased deficits and levels of debt.

Moreover, market analysts wonder how Mr. Trump will balance these policies, which are mostly positive for financial markets, with his promises to increase trade barriers on goods from Mexico and China.

Mr. Trump’s antitrade position has prompted fears that he would precipitate a trade war at a time when global trade is already suffering because of increased protectionist measures in countries around the world.

“This is not Brexit,” said Jeffrey Kleintop, an investment specialist at Schwab Investments, referring to the rally in stocks and bonds that soon followed Britain’s vote to leave the European Union. “That will be a long process of negotiated change. The worry is that Mr. Trump would follow through on his promise to raise tariffs on China and Mexico.”

In that vein, emerging market currencies and stock markets bucked the market’s buoyant mood. The Mexican peso was down about 8 percent against the dollar and the Chinese renminbi continued a recent trend of weakness, suggesting, some traders said, that China might be pushing the currency lower to give exports an extra lift before Mr. Trump takes office.

More than most days, investors flocked to exchange traded funds during the market’s opening hours, with E.T.F.s at one point accounting for 45 percent of total stock market trades, according to officials at BlackRock. Among the more popular was iShares biotechnology fund, which soared 9 percent on the hope of fewer regulations for pharmaceutical companies under Mr. Trump. 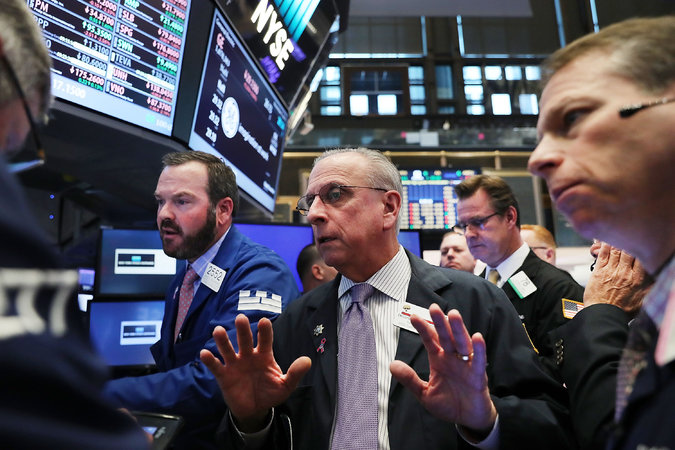 On Wednesday, the benchmark S. P. 500-stock index closed up 1.1 percent. The Nasdaq composite index also ended up 1.1 percent, while the narrower Dow Jones industrial average rose 1.4 percent. Trading volume was the heaviest since the market turmoil of late June after Britain’s vote to leave the European Union.

For now, the market’s willingness to cast a positive eye on a Trump victory seems tied to the prospect of more government spending.

In the weeks leading up to the election, a noticeable trend has been the slow but persistent increase in the interest rates of government bonds, many of which have been in negative territory for some time as investors sought safety in these securities.